Using the Canon 40mm Pancake Lens with a Sony A7 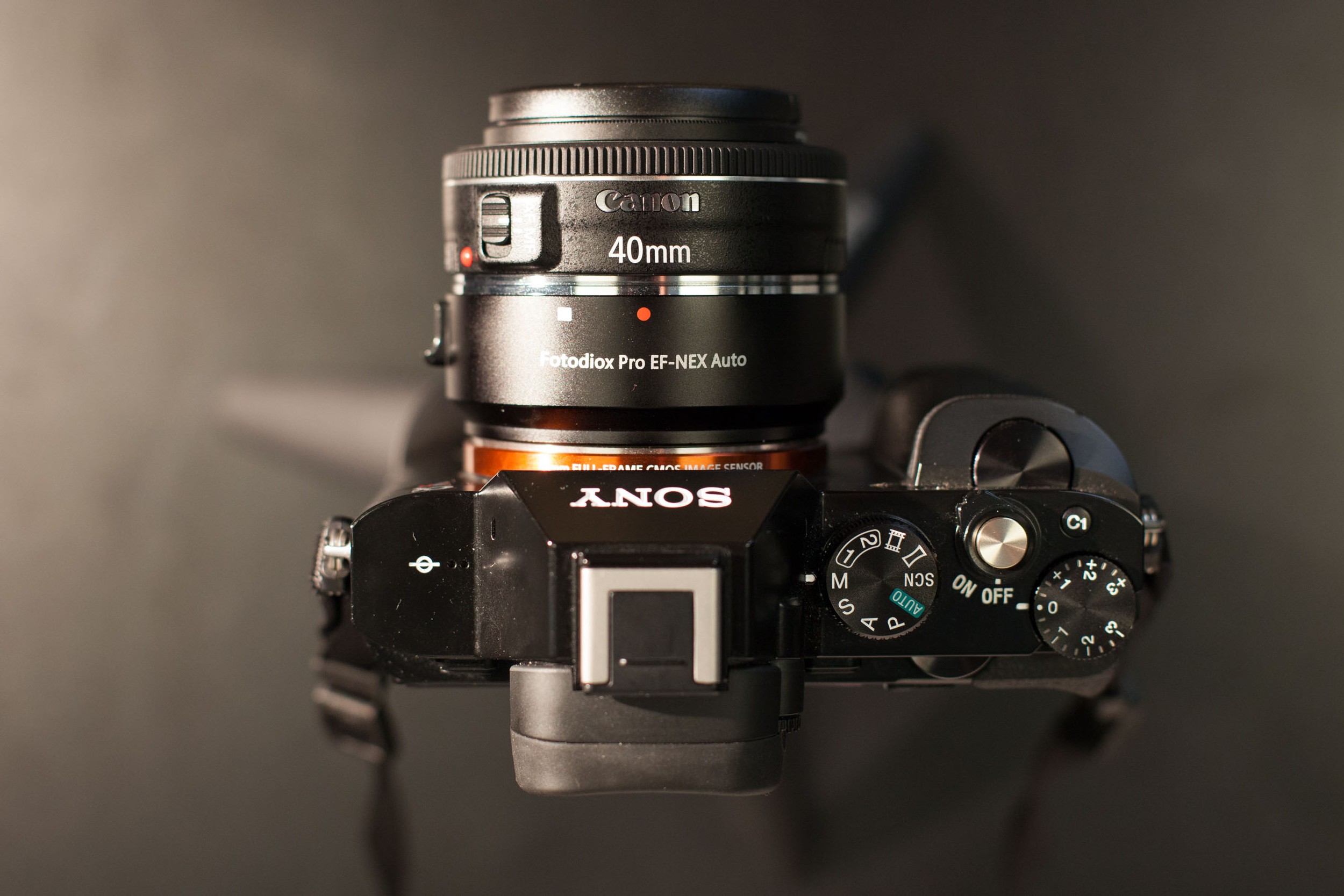 I finally picked up a lens that I’ve been eyeing for a while now: The Canon EF 40mm “Pancake” F/2.8 lens. I wanted this lens because of its low price point ($150.00 new), the fact that its full frame, and for its portability on both a Canon camera as well as on my Sony A7R. Yes, there are e-mount pancake lenses for the Sony, but none of them are this inexpensive and none of them are full frame. Of course when using the Sony, I need to use an adapter so the portability aspect takes a bit of a hit, plus if you don’t already own an adapter you’ll have to purchase one. My other reason for wanting this lens was to attempt to use it to shoot video at concerts. The A7R is so small that it can pass for a “point and shoot” camera (which most venues allow) and my thought was the 40mm pancake might be the small enough to attempt to bring into a venue. I’m thinking that 40mm is a nice lens size for concerts, but I have yet to try this out. So how well does this lens work on the Sony A7 series? Read on…

The first thing I noticed once I put both the adapter and the 40mm pancake lens on my Sony A7R was that it didn’t look quite as small as I had hoped. The adapter is actually slightly larger than the lens, and with both attached I ended up with a combo that’s about the same size as a 50mm “plastic fantastic” lens. Take a look at these images to get a good idea of what the camera looks like with this lens attached: 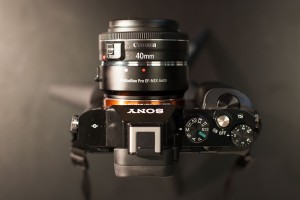 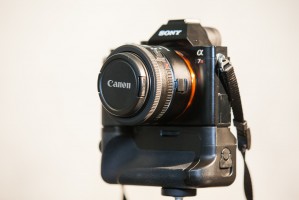 As you can see, it’s small, but not exactly “tiny.” Still pretty cool though, and a great combo for street photography.

So how well does it work? I can say that I’m very happy with the images produced by this lens. Colors are rich and the lens is fast enough for good low light performance.

I’m using the Fotodiox Pro EF-NEX Auto adapter to connect this lens to the Sony camera body, and like most of these adapters the autofocusing is somewhere between absolutely dreadful and simply nonexistent, especially in low light. Fortunately the Sony A7 line has a very handy and functional focus peaking feature, which works very well with this lens. On the downside, because this lens is so small, the focus ring is tiny. Also, in case you were wondering, this little lens works extremely well across the board on a Canon camera (what a shock).

One of the perhaps not quite as well known features of the Sony A7 line is that when full frame lens is attached, you can tell the camera to use the lens in a “cropped sensor” or “APS-C” mode, which lowers your quality to around 22 megapixels (on the A7R) but actually increases your magnification by 1.5x (similar to putting the camera in “DX Mode” on a Nikon). So I always look at full frame prime lenses on this camera as a “two for one” kind of deal, and this lens is no different. When putting the camera in “cropped sensor” mode, this 40mm lens becomes a 60mm lens – pretty sweet!

Here’s a couple of examples showing photos taken in “full frame” mode as well as in “cropped sensor” mode: 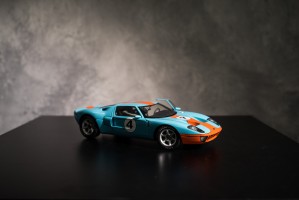 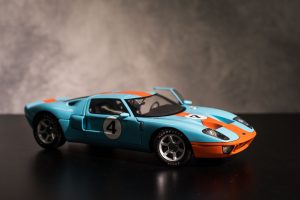 As you can see by the photos above, that’s a pretty significant difference. The top image is at the lens’s native 40mm focal length. The bottom image, with the camera in “cropped sensor” mode, is at a 60mm focal length. That’s what I mean by “two lenses in one” when it comes to buying full-frame lenses. Is that the same thing as cropping photos in post? Yes. However there are sometimes instances where you won’t have an opportunity to do any editing in post at all (maybe you are handing the photos off to someone in a “as is” state). Another use that I’ve found for the APS-C mode is when shooting video. If you need that little bit of extra zoom, using APS-C mode is a great way to get yourself there. The camera will shoot in 1080p regardless.

Shown below is a gallery of photos that I recently took using this lens/adapter combo.

All told, after spending a day with this lens/adapter combo, I think the better option would have been to shell out an extra $100 and purchase the Sony 16-50mm pancake lens or maybe even an extra $170 for the Sony 20mm F/2.8 pancake lens. Both of those are cropped sensor lenses, so I would have to deal with the crop factor and lower megapixels. That being said, as mentioned above the crop factor is 1.5x, so these lenses would become a 24 – 75mm lens for the first one mentioned and a 30mm for the 2nd. The biggest differences though? No adapter, more portability, and a truly reliable autofocus system.

I’ve not yet tried this camera/lens combo at a concert, but if I do I’ll write another post about the experience.