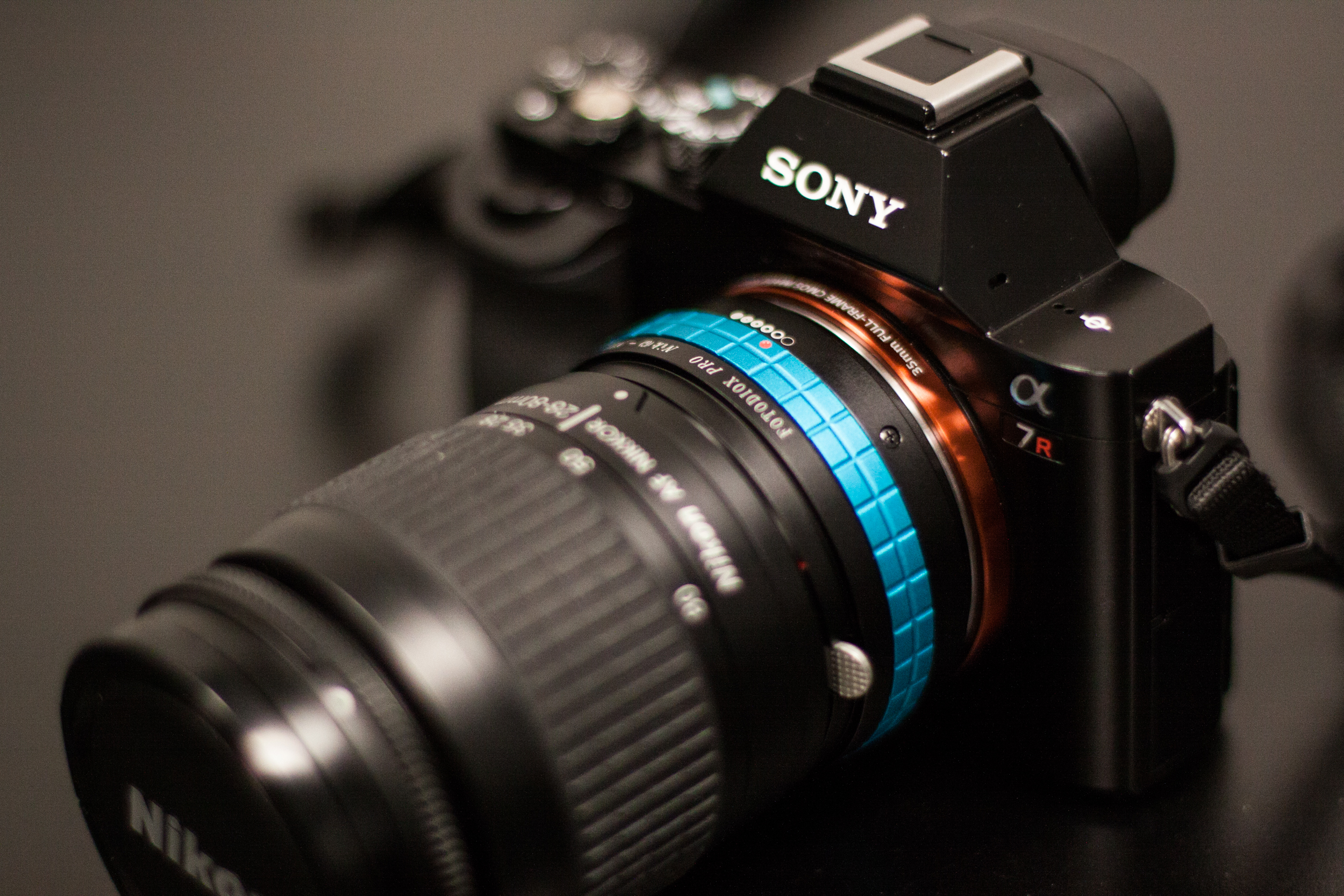 I finally got my hands on the Fotodiox Pro Nikon (G) to Sony NEX Adapter ($59.95 on Amazon). I recently made the switch to the Sony A7R camera, and I’ve been collecting lenses from various friends and family members ever since. If you end up buying any of the Sony E Mount cameras, the first thing you should do is see if anyone has old 35mm lenses laying around that they’d like to part with. I have a bunch of lenses from various manufacturers now, which means I’m in the market for adapters constantly. I’ve been lucky that many of the lenses I’ve obtained have manual aperture controls on them, which equates to inexpensive lens adapters. However, one of the lenses I was given is a Nikon 28 – 80 mm lens with no manual aperture controls. I had already used this lens on my old Nikon D3000, so I know it takes nice photos (here’s a nice example). Upon searching for adapters that allow for aperture control, I ran across the Fotodiox Nikon (G) to NEX adapter.

The adapter comes shipped in a small cardboard box, which is enclosed in a padded envelope. There are no instructions. Not a huge deal, but there are a couple of little buttons and switches on this thing, so a diagram at the very least would have been helpful. Regardless, I had a lens mounted on the adapter within a few minutes and I was happily shooting away about a minute after that (it’s a good idea to put the adapter on the lens before putting the whole thing on your camera). The lens attaches to the adapter easily but snugly. There’s a satisfying click telling you the lens is in place on the adapter, then after that it’s just a matter of knowing where to line this thing up on the A7R body to get the adapter/lens mounted.

Using the adapter is easy and straightforward. Once you figure out what that bright blue ring on the adapter is for, it’s easy to change apertures. The open circle means large apertures, the closed circle is (obviously) small apertures. You can choose to have the adapter click to each aperture setting, though there are only five “stops”.

I was perfectly fine with that, but then I figured out what the other switch on the adapter does. There’s an odd switch on this thing with weird icons that are supposed to explain what the switch is for. The icons don’t really explain much, but basically you can choose to have the aperture ring “click” to each aperture setting, or you can allow the ring to be constantly variable. What does that mean? Well, it means there are no true “stops”. You just move the blue ring left or right to adjust aperture. So, if you ever wondered what f stop sits between f/2.8 and f/3.5, this adapter will let you see what it looks like. This is also great for adjusting f stops on the fly while shooting video, as the transition is extremely smooth.

As with most of these adapters, there are no electronics involved. The point here is simply to allow the Sony camera to see through a Nikon lens. As such, the camera has no idea what aperture you are shooting with. Truth be told, unless you are at either the most wide open or the most closed aperture setting on the adapter, it’s pretty hard to know exactly what f stop you are using. That’s not the point of the adapter though, the point is to get Nikon glass to work with your Sony. And in that aspect, this adapter works very well, especially for the price! There’s a far more expensive alternative by Novaflex, but at around $250 I can’t see myself picking up one of those anytime soon.

Hopefully this quick review helped you if you are considering picking one of these Fotodiox Pro Nikon (G) to Sony NEX Adapters up. I’m really happy with it!