I remember when I first got into using a DSLR and the terms “cropped frame” and “full frame” kept popping up. If you are reading this and have no idea what I’m referring to, don’t worry, I didn’t know what they were talking about either. Basically it all boils down to the size of the sensor on the camera body. The term “full frame” refers to cameras that use a sensor that’s essentially the same size as 35mm film (36 x 24mm). A “cropped frame” camera refers to a camera that uses a sensor that’s smaller than 35mm film. So what’s the difference? There are actually several differences, which I’ll outline below.

Using a full frame camera body, you are able to take full advantage of the focal range of a full frame lens. A lens such as a 50mm was originally intended to be used with a film camera. Put that 50mm lens on a full frame body, and your camera will use every bit of those 50 millimeters. Put that 50mm lens on an APS-C cropped sensor camera body (Canon Rebel T5i or similar)…now it’s a different story. Cropped frame cameras will cause your image to be cropped by varying amounts depending on the sensor size. On an APS-C camera, the image will be cropped by 1.5x. This means the image will appear 1.5x closer to the camera than it would have on a full frame camera, meaning you’ll need to stand further away in order to get the same shot that the full frame camera was able to capture. Is it a dealbreaker? Maybe, maybe not, but this essentially means that a 50mm lens now becomes a 75mm lens on an APS-C camera. That also means that a 300mm lens now becomes a 450mm lens! So for some people, such as wildlife or sports photographers, a cropped sensor camera can actually be an advantage. The image below is a visual representation of the difference between a full frame and an APS-C camera. 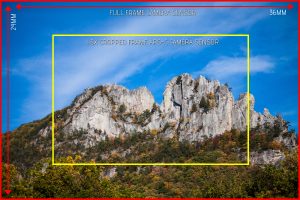 You might be thinking that if camera bodies are built with cropped frame sensors, wouldn’t that mean there must be cropped frame lenses as well? Yes indeed, there are. In fact, if you bought something like a Canon Rebel and it came with a couple of lenses, chances are those lenses are cropped frame lenses which won’t work properly on most full frame cameras. Some cameras, like Sony’s A7 line of full frame cameras, will automatically adjust the camera body and add the required 1.5x crop factor when a cropped sensor lens is attached. Other cameras will allow you to mount the lens, but you’ll see an ugly black ring around the edges of the images you take (you’ll see this in the viewfinder as well).

Keep in mind too that full frame lenses are far more expensive than their cropped frame counterparts. They are also generally much heavier.

Based on what you just read about lenses, you might be thinking cropped frame is the way to go. However, there’s really no other way to put it – full frame cameras produce richer images than cropped frame cameras do. A full frame sensor has a real advantage when it comes to low light and high ISO. Simply put, full frame cameras can better handle low light situations and higher ISOs while maintaining a more acceptable image quality. For example, on my Sony A7R, I never think twice about going as high as 3200 ISO. I already know that the image produced might have some noise, but it will be perfectly acceptable. On a cropped sensor camera, I’d be hesitant to go anywhere over 1600 ISO. Dealbreaker on the cropped sensor camera? It really depends on how you plan to use the camera. For me personally, I enjoy “blue hour” and night photography, so the ability to use ISOs as high as 3200 frees me up from having to use a tripod if I’m doing something like taking random shots in a city (because my shutter speeds can still remain relatively fast).

Dynamic range comes into play here as well. Dynamic range is a broad topic, but essentially it refers to the amount of light and dark detail held in the pixels of a photo. At the time of this writing (August, 2016) a full frame camera is going to house a better sensor than a cropped frame camera. As a result, the full frame camera will produce an image with higher dynamic range than a cropped frame camera will. The easiest way to see this in action is to process a photo (using Photoshop, Lightroom, or any equivalent software) taken with a full frame camera with areas that appear either too bright or too dark. With a full frame camera and its higher end sensor, you stand a better chance at pulling out details that you thought were lost. I’ve shot photos with my Sony A7R where the sky appeared blown out completely, but with some minor tweaking in Lightroom, I discovered that I had actually captured details such as clouds. I’ve also shot photos where details appeared lost in the shadows, but I was again able to pull those details out. It’s to the point where I’m rarely shooting HDR anymore, the dynamic range on that A7R is so good. Take a look at the sensor ratings over at DxOMark and notice how most of the highest scores belong to full frame cameras.

Another consideration is megapixels. “Pixel” is short for “picture element” and the more pixels you have, the higher the image resolution. A full frame camera generally has a higher megapixel count, although in all honesty that’s not a huge deal, and the term “megapixel” has become a huge marketing gimmick these days. Equally (if not more) important to image quality is the camera sensor, processor and lens quality. Basically if you are taking a “high megapixel” photo using substandard equipment, you’ll end up with a “high megapixel” substandard photo. I’m not saying to ignore megapixels completely, I’m just saying they aren’t the “be all, end all” when it comes to image quality. I will say they do come into play if you do something like crop the living daylights out of an image in order to “zoom in” on a particular section. In that scenario, you’ll find out really quickly how important it is to have lots of high quality megapixels, and a full frame camera will definitely give you an edge in that situation. Also if you just like to “pixel peep” at the ridiculous details in a photo that a high megapixel camera produces, full frame is the way to go.

You’ve probably noticed that there are a lot more lens choices if you are shopping for a cropped frame camera lens vs a full frame lens. The quality on those cropped frame lenses can be anywhere from dreadful to fantastic, so you’ll end up doing a lot of comparison shopping. Over on the full frame side, the playing field is a lot more level. In general, you don’t have to worry as much about the quality on full frame glass (hence the price tag!). There also tends to be fewer options when it comes to full frame lenses. Some people refer to the “trifecta” when discussing lens choices. They are referring to the fact that you can get way with buying three lenses to cover just about all of your photo needs – those three choices are usually a 14-24mm, a 24-70mm, and a 70-200mm. If nothing else, going with that route on lens choices makes shopping for them pretty easy (as long as you can afford it).

Another area where full frame cameras shine is when it comes to depth of field. You’ve heard the term “shallow depth of field” when it comes to a photo with a blurry background I’m sure. That blurry background can be achieved a few ways, but one of the most common ways is by using low f-stops. For example, dropping the f-stop to around f/1.8. Things get a bit difficult to explain at this point when comparing cropped sensor to full frame, but the bottom line is that the more cropped the sensor, the more difficult it’ll be to use f-stops alone to achieve shallow depth of field (blurry backgrounds). On an APS-C camera, the depth of field difference won’t be quite as apparent. The real issues start to appear when you get into cell phones or simple point and shoot cameras. Shallow depth of field can be achieved in quite a few different ways, so I’m not suggesting that anything other than a full frame camera can do it. I’m only saying that with a larger sensor, it’s easier to achieve.

There are some other considerations when it comes to selecting a cropped frame vs. a full frame camera. Do you already have a stable of lenses from an older 35mm film camera? If so, those are all “full frame” lenses (because they came from the days of 35mm film cameras) and could potentially be compatible with a modern digital camera. Compatibility depends on age of the lenses, usually.  One thing that I discovered when I purchased my Sony A7R (a full frame camera) was that with the purchase of adapters, I was able to use lenses from most manufacturers.  Most people have friends or family with an old film camera somewhere in their home that’s just sitting and collecting dust. Those lenses are a potential goldmine, and people are often more than willing to just hand that “old junk” over. I now have a bunch of full frame lenses that were given to me for free. Point being, old 35mm film equipment is all “full frame”, so even though a full frame camera body might be expensive, you may find yourself with some free lenses just by doing a little bit of asking around.

The biggest consideration is of course budget. For the average photographer, a cropped frame camera is fine. If you are a sports or wildlife photographer, or just someone who likes a small and light camera at the ready, a cropped frame camera is probably the way to go. If you are more interested in photography such as weddings, landscape, portraiture, long exposure, or astrophotography, then full frame would be the way to go.

I personally chose to go the full frame route because I was fortunate enough to be able to spend some quality time using both a cropped frame as well as a full frame camera (I have a Canon 50D and a Canon 5D Mark II at work). I found myself appreciating all the benefits that the 5D Mark II provided me. For my personal camera, I love what Sony are doing with the A7 line, so I went with the A7R. I’ve been loving the results from that camera, especially once I had saved up enough to pick up the Sony 16-35mm Vario-Tessar lens.

Hopefully this post helped if you are trying to decide which route to take on your next camera purchase. Feel free to leave any comments or questions below!