Using an Atomos Ninja with the Canon 5D Mark IV 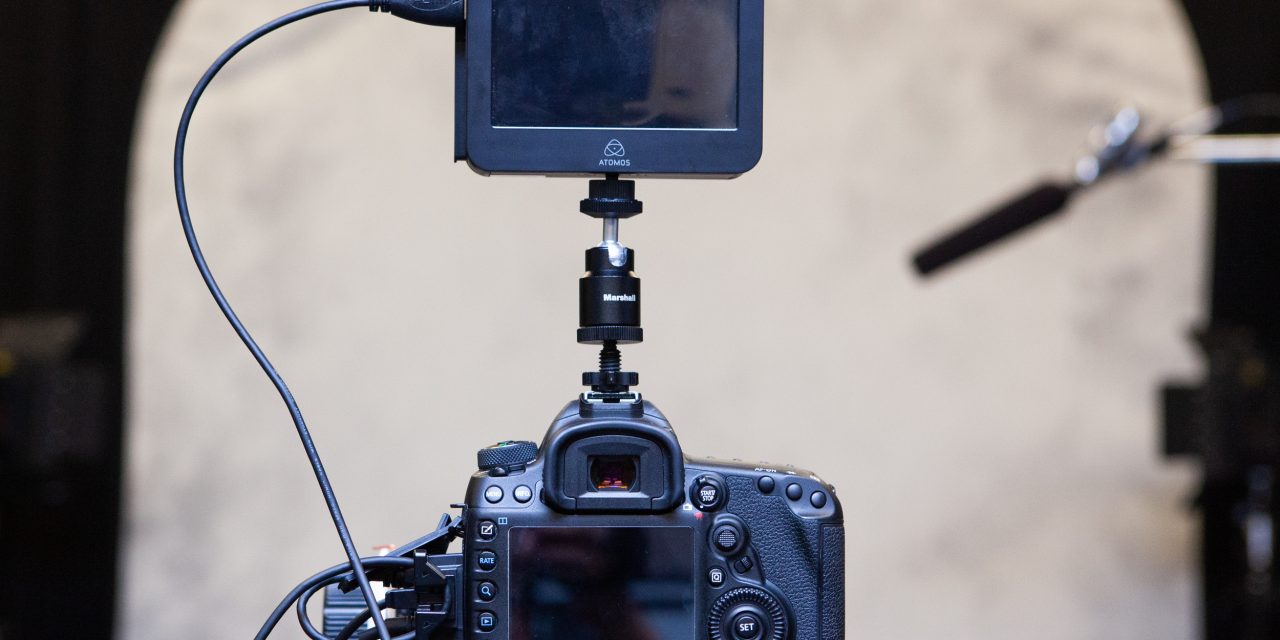 I recently got my hands on a Canon 5D Mark IV (upgraded from a Mark II) and one thing that I was eager to try on it was recording to an external HDMI device, specifically the Atomos Ninja 2 HDMI recorder that I’ve had for a while now. Atomos has replaced the Ninja 2 in recent years by the Ninja Flame (probably due to the lack of 4k support on the Ninja 2). This tutorial focuses on using the Ninja 2 with the 1080 HDMI output of the Canon 5D Mark IV. The Canon 5D Mark IV does not support 4k video out of its HDMI port, so the Ninja 2 is actually a perfect external recorder for it.

The Ninja 2 is a portable HDMI recorder that records directly from your camera’s sensor. Your camera is saved from the usual wear and tear of having the sensor heat up (which can also result in noisy footage) and you get better video quality in the Ninja 2. Not to mention the only limitation in terms of the length of the clip that can be recorded is the size of the hard drive you’ve chosen for the Ninja. For long form video shoots where 1080i is an acceptable resolution, The Ninja 2 is a great solution. So how does it work with the 5D Mark IV? Read on…

The Canon 5D Mark IV does not output 4k from its HDMI port, which was a big complaint among users when it was released in 2016 (it does record 4k internally, however). For my workflow, this was not an issue as I’m almost always shooting and editing in 1080p. In fact, for me the 5D Mark IV is a huge upgrade in terms of recording to an external device as the 5D Mark II had no reliable way to do so. Sure, you could install Magic Lantern, but even that didn’t get you a full 1080p resolution from the HDMI port. Not a problem with the Mark IV! So the Ninja 2 is a great solution, and the price can’t be beat ($295).

The Ninja 2 and 5D Mark IV work nearly perfectly together directly out of the box, but there are some settings you need to be aware of, which I’ll cover below. 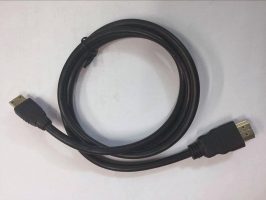 With that cable in hand, you’ll need to dive into a few camera settings. First off, you’ll want to set the HDMI frame rate to match what the Ninja 2 will be recording. The Ninja 2 can record at the following resolutions and Frame rates: 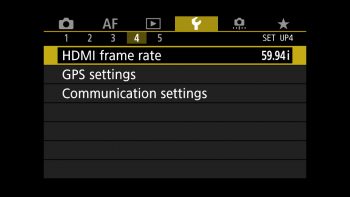 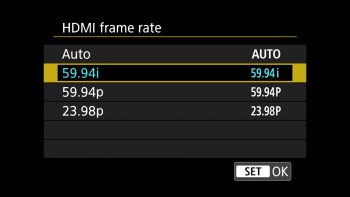 Your 5D Mark IV came with a cable protector (it’s a weird looking plastic thing). The purpose of the protector is to prevent damage to the HDMI input, which apparently costs a LOT of money to repair. Here’s what the cable protector looks like with the HDMI cable routed through it: 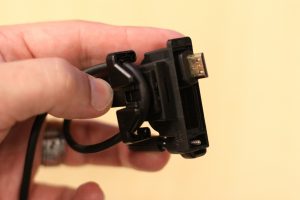 Attach the cable protector to the camera, as shown below: 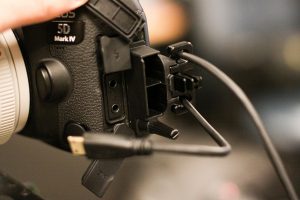 Next, go ahead and plug your HDMI cable in, as shown below: 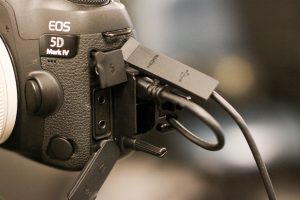 HDMI cable plugged into the camera with Canon cable protector

You’ll need a hot shoe adapter in order to attach the Ninja to your camera. There are several to choose from on Amazon, but getting one with a ball head is the best choice – this one will get the job done. The image below shows how the adapter allows you to attach the Ninja to your camera and how the ball head allowed me to fine tune the position:

Setting the resolution, frame rate and codec on the Ninja 2

Resolution and frame rate settings on the Ninja 2 can only be changed when an HDMI cable is plugged in, so plug in the HDMI cable from the camera to the Ninja as shown below: 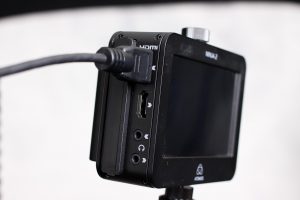 Plug the HDMI cable into the Ninja using the top port.

Next, put the camera in video mode using the switch on the back of the camera, as shown below: 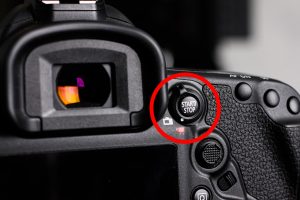 Power the Ninja 2 on by pressing and holding the power button on the side of the unit as shown below: 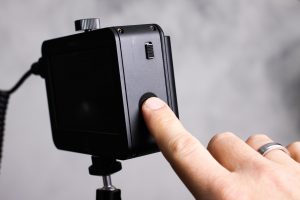 Powering on the Ninja 2 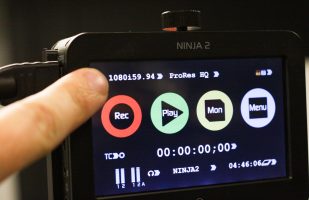 To change the codec, tap the screen where the codec is currently listed (you can see that mine is set to “ProRes HQ” which I recommend). 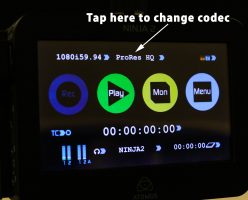 Changing the codec on the Ninja 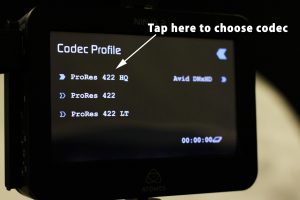 Using the 5D Mark IV with the Ninja 2

Now that all of your resolution and frame rate settings are correct on both devices, push the “Mon” button on the Ninja.  Mon stands for “monitor” in case you were wondering.

You’ll now see a preview on the back of the Ninja, along with a few other menu items.

You might also see a bunch of menu items from the camera itself, and you’ll definitely want to get rid of those! You can easily remove them by pressing the “INFO” button on the back of the camera.

Info button on the back of the Canon 5D Mark IV

Keep pressing the Info button until you get a clean signal from the camera to the Ninja that’s not showing a bunch of menu items. The Ninja records whatever it shows on its monitor (other than its own menu items). It’s literally “what you see is what you get.”

If you don’t want those menu items to ever show up, there’s a setting on the camera that allows you to change that. On page 5 of the “shoot” menu on the 5D Mark IV (the menu with the little camera icon), there’s a setting for “HDMI display.” Press that and you’ll see that you can choose to have the camera output a signal without any info showing. 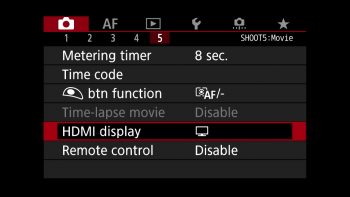 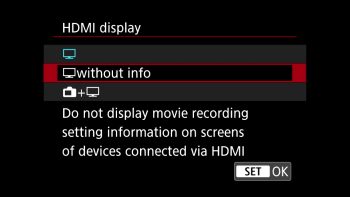 Output the HDMI signal without any info screens showing

VERY IMPORTANT: There’s also an HDMI display setting on the camera that allows you to utilize the LCD on the camera as well as the LCD on the Ninja (simultaneously), with the added benefit being that the only thing seen by the Ninja is the video from the camera (no menus). Sounds perfect, but if you plan on shooting for more than 35 minutes without interacting with the LCD at all, DO NOT USE THIS SETTING! For some reason, if the camera’s LCD remains on and there’s no interaction between you and the camera, the camera will shut its screen off after 35 minutes and give you a message that says “Press Start/Stop button to activate movie shooting.” Worse still, recording will stop on the Ninja 2. I found this out the hard way, so trust me – if your camera will be recording for over 35 minutes without any interaction from you, never use this setting! The setting is shown below. 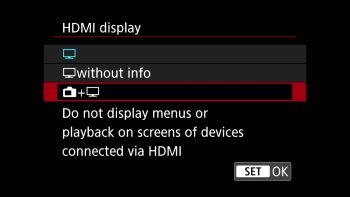 DO NOT USE THIS SETTING UNLESS YOU’LL BE INTERACTING WITH THE LCD DURING RECORDING! 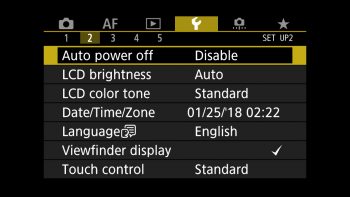 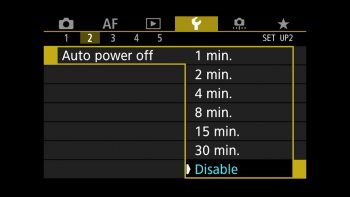 Disable the Auto power off settings!

While the Ninja 2 solves the problem of allowing you to record for longer periods of time than the camera default, what about battery life? Sadly, the standard battery won’t last very long without a bit of help. Fortunately, there is a solution.

The setup that I put together utilizes these four pieces of equipment (around $187 total): 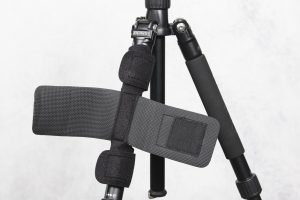 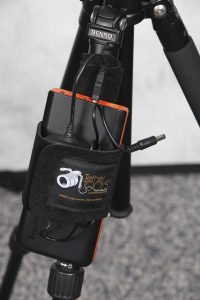 The only thing left to do now is attach the Tether Tools Relay Camera Coupler and plug it into your camera where your original battery was. Keep in mind that in order for this to work on the Canon 5D Mark IV, you’ll need to use the little hidden “trap door” and run the cable from the Camera Coupler through it. The camera will literally not turn on unless the battery door is closed nice and tight, so this is a vital step! Shown below are some shots of how the hidden door works along with both ends of the Camera Coupler plugged in: 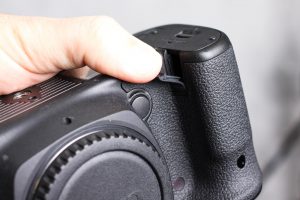 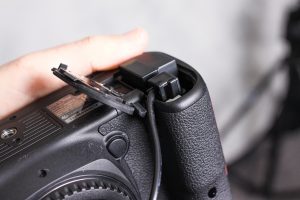 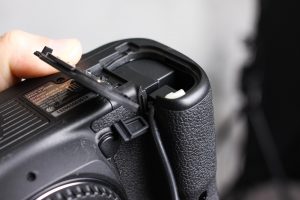 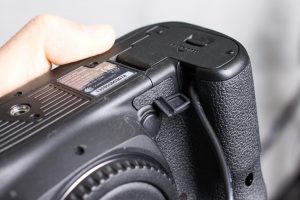 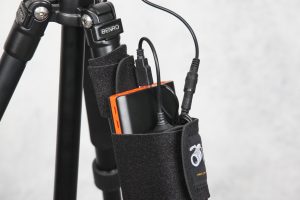 The StrapMoore and the Case Relay Power System working together! 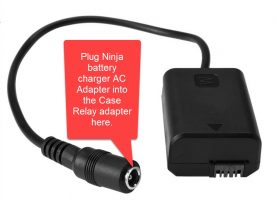 The Ninja 2 also comes with its own A/C power adapter, so it can also be plugged into a continuous power supply. Not only that, but the Ninja 2’s batteries are hot-swappable (there are two batteries on the back).

That’s it! The beauty of this system is that you can now record for much longer than the default recording time that’s inherent to the camera, plus there’s far less wear and tear on the camera’s sensor.